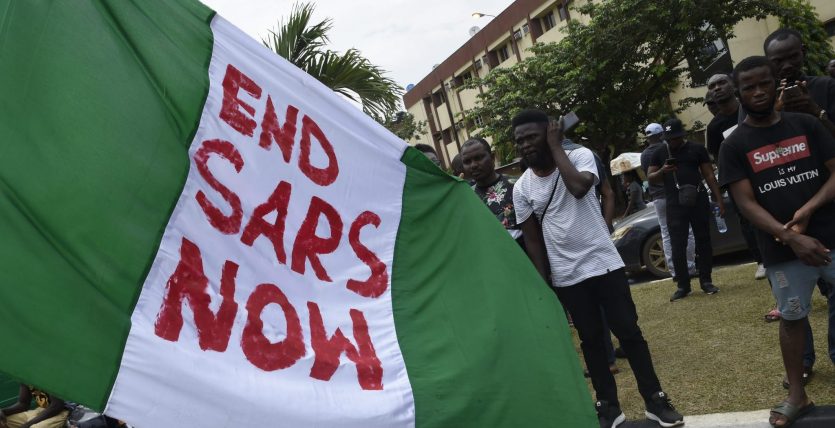 End SARS is a decentralized social movement and series of mass protests against police brutality in Nigeria. The slogan calls for the disbanding of the Special Anti-Robbery Squad (SARS), a notorious unit of the Nigerian Police with a long record of abuses. The protests which take its name from the slogan started in 2017 as a Twitter campaign using the hashtag #EndSARS to demand the disbanding of the unit by the Nigerian government. After experiencing a revitalization in October 2020 following more revelations of the abuses of the unit, mass demonstrations occurred throughout the major cities of Nigeria, accompanied by vociferous outrage on social media platforms. About 28 million tweets bearing the hashtag have been accumulated on Twitter alone.

SARS officers have been alleged to profile young Nigerians, mostly males, based on fashion choices, tattoos and hairstyles. They were also known to mount illegal road blocks, conduct unwarranted checks and searches, arrest and detain without warrant or trial, rape women, and extort young male Nigerians for driving exotic vehicles and using laptops and iPhones. Nigerians have shared both stories and video evidence of how officers of SARS engaged in kidnapping, murder, theft, rape, torture, unlawful arrests, humiliation, unlawful detention, extrajudicial killings and extortion of Nigerian citizens. A large section of the victims of the abuses of SARS have been young male Nigerians.

Opem Media in collaboration with Talented, Janet Akor and other models came up with a these photos to portray why Nigerians demand #ENDSARS

One of the ways of ensuring that Nigeria becomes a great nation is if people in position of power and authority are responsible and are held accountable for their actions, people in government positions must adhere to the rule of law and must work within its scope.